Wheelchair State of Origin hoping to build on 2018 success

A year after the growth of wheelchair rugby league really hit home, NSW player Brad Grove said Saturday's State Of Origin match against Queensland presents an opportunity to take the game to the next level.

The reception afforded to players in the 2018 Origin clash marked a high-point for a sport that is only 10 years old.

Grove, who was named man of the match in the Blues' 54-18 win over the Maroons, said that contest was about more than just the players on the field.

"Last year we put a fair bit of effort into setting up the game as it was being held just across from the men's game at ANZ Stadium," Grove said.

"Honestly, we didn't expect the crowd we got or the response from the live stream.

"As players, we want to show the community that we do consider ourselves to be professional athletes and that the sport is just as entertaining as rugby league or any other professional sport.

"We have a great bunch of people involved in our sport with many stories of hardship. If our game this weekend and the sport, in general, can assist others in overcoming their own hardships, then I feel we have achieved our goal." 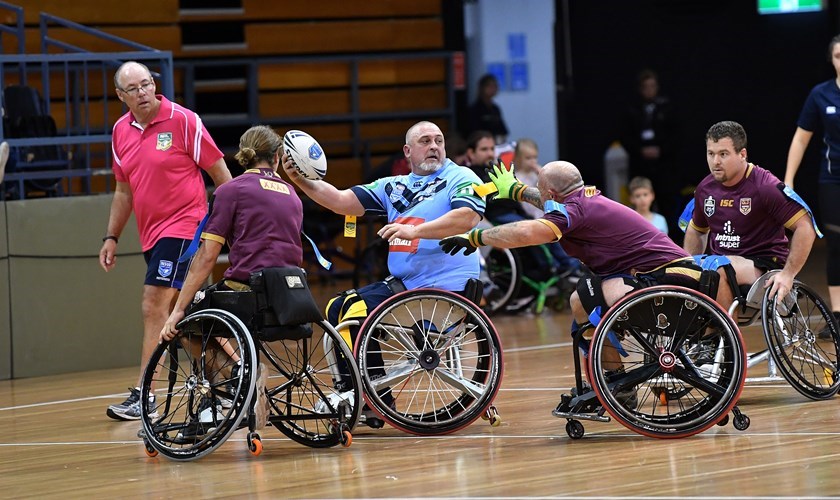 Grove hopes Saturday's event, which begins at 1pm at the Quaycentre at Sydney Olympic Park will be able to bring more attention to a sport largely run by volunteers. The main game starts at 3pm.

"We currently run under only a handful of volunteers so games like Saturday's match are extremely important in gaining support," he said.

"We need support from organisations and businesses to assist with funding for establishing developmental programs and competitions across Australia."

While Wheelchair Rugby League shares many similarities with the regular game but there are a number of other rules and modifications.

A tackle is completed when a tag is taken off the shoulder, while conversions, penalty kicks, and dropkicks are all done with the fist.

"Just like the men's and women's game, our Wheelchair State of Origin is the pinnacle match for the sport in the country," Grove said.