Craig and Cory Cannane have broken new ground after the father-son duo were named alongside one another in the Wheelaroos squad which will face England next month.

Craig has represented the Wheelaroos - Australia's wheelchair rugby league team - since 2013, having already carved out an illustrious career as part of the Australian Wheelchair Basketball team which included the honour of carrying the 2000 Sydney Paralympics torch. 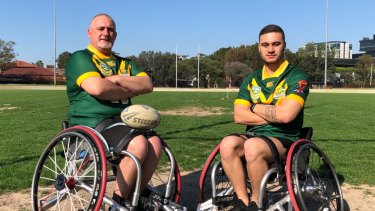 But none of his career achievements will measure up to lining up alongside his abled bodied son Cory, who only took up the sport as a 17-year-old.

"It will definitely be the proudest moment I've had," Craig said.

"As a father you really couldn't ask for anything better.

"To get the chance to show what we can do together - here in Sydney - words can't describe it, really."

Cannane called for curious fans to attend the two Test series against England next month.

In his eyes, once you get a glimpse of wheelchair rugby league, you'll be hooked.

"It's a game that doesn't discriminate," Cannane said.

"You can be able bodied and play and that attracts some great people to our game.

"I play wheelchair basketball with Cory on Wednesday night's socially but he can't play in tournaments. 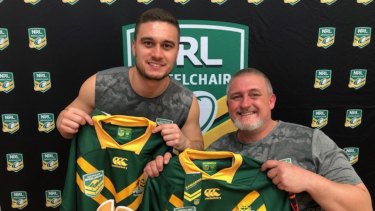 "To be able to represent our country alongside each other is really special."

Wheelchair rugby league was only introduced to Australia in 2009.

It is played across two basketball courts and features five players per team. At least three disabled players must be on the court at all times.

A tackle is called when a player takes the tag of an opponent.

The Wheelaroos will first face England at The Whitlam Centre in Liverpool on October 21 before taking them on at the University of Wollongong two days later.